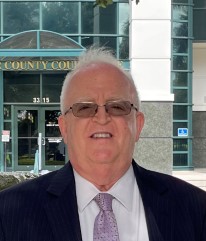 January, 1996 to the Present – Criminal Defense

I have been a criminal defense attorney since leaving the State Attorney’s Office in 1996. Over 24 years, I have represented thousands of clients charged with crimes ranging from DUI to capital murder, as well as clients who avoided being criminally charged at all due to preemptive intervention. I have represented many clients in parallel proceedings such as forfeitures or professional licensure proceedings, and I also handle criminal appeals to the 11th Circuit Court of Appeals, and 2nd District Court of Appeals.

Since 2005, I’ve been Board Certified by the Florida Bar in Criminal Trial. I am qualified as Lead Counsel in Capital Cases, and am a member of the Florida Association of Criminal Defense Lawyers Death Penalty Committee. I am also on the Middle District of Florida’s Mentor Panel.

I have defended state cases dealing with DUI, all levels of murder including manslaughter, theft and frauds, robberies, assaults, drug charges, sexual batteries, and lewd assaults.

Federal cases I have defended include: Overprescribing by a Physician, Murder on the High Seas, Wire Frauds, Narcotics, Conspiracies, Trading with the Enemy (smuggling cigars into the U.S. from Cuba), Possession of Firearms by Convicted Felons, Money Laundering, and Healthcare Fraud.

I was an Assistant State Attorney for fifteen (15) years. I started out prosecuting juvenile offenses and misdemeanors. After six months, I moved to the Felony Division, where I prosecuted mostly drugs offenses, thefts, and burglaries. After three years in Felony, I moved to the Organized Crime Division, where I worked with investigators to put together major fraud and drug smuggling cases, and then prosecuted them.

In my last ten years as a prosecutor, I investigated and prosecuted white-collar crimes. As more and more of those cases involved computers, either as the target of the crimes or to carry them out, I  taught state and federal agents how to investigate and prosecute computer crimes.

During my career, I have tried between 400 to 500 jury trials, most of them involving felonies, and fifty to sixty of which were federal criminal jury trials.